“What’s better than an intuitive technology that allows you to explore non-intuitive-optimal solutions?”

A common way to design a rational structure is to create a system composed of 2D elements, such as beams and pillars. In a paradoxical way, an optimal solution is represented by an organic-like structure in which the material is arranged to guarantee strength and lightness.

In this article I will talk about INNOVATION, SIMULATION, OPTIMIZATION applied to the Architecture, Engineering and Construction (AEC) market. Moreover, we’ll examine how such concepts have taken on a fundamental role in the design of a bridge by means of Topology Optimization and why they may be very much relevant beyond AEC to architects and engineers in different market sectors.

This challenge generated a stimulating curiosity within me, beginning a profound reflection on the meaning of those concepts. At first glance, they might seem easy, even trivial to describe.
Quickly I’ve realized that by modern definition they assume deeper meaning because of their reciprocal influence.

In my opinion, if INNOVATION can be defined as the combination of exploration, inspiration, evolution and technology oriented to improve the quality of life, than one could say that INNOVATION is an evolutionary process to create and refine products and processes in any field of application.

Today’s new standards for construction have becoming increasingly more demanding. Architects are experimenting with new materials developed by engineers to improve the thermal efficiency of new buildings, while the engineers are continuously experimenting with ways to build the complex shapes created by the talent and creativity of the architects.

What could be the next evolutionary step in this process?

I’m convinced that SIMULATION represents the Rosetta Stone between architects and engineers.

It can improve the way in which they collaborate, suggesting a common language and sharing the same environment.
At the end of the day, SIMULATION is an intuitive concept; and all of us, at least subconsciously, know its meanings.

However, the real challenge is to deliver a suitable technology to perform SIMULATION.
A user-friendly technology is the key to broaden the usage of SIMULATION, giving designers the right tools to create innovative, lightweight and sustainable projects.
A good tool would allow designers to save material, energy and time and help them to achieve more efficient results.

Starting from the last assumption, I like to consider OPTIMIZATION as an evolutionary form of SIMULATION.
The general idea of is easy to understand, especially in today’s very competitive economy; but, how do you turn a concept like that into a reliable technology?

Moreover, how do you make a technology intuitive?

In the recent years a new buzz word – app – has shown the whole world a further evolution of technology. Today, software (better, an app) can be intuitive and even fun!
In any case, these programs must be intuitive for their users, and this opens the field for a discussion regarding Interaction Design and 3D projection mapping that I will leave for another time. 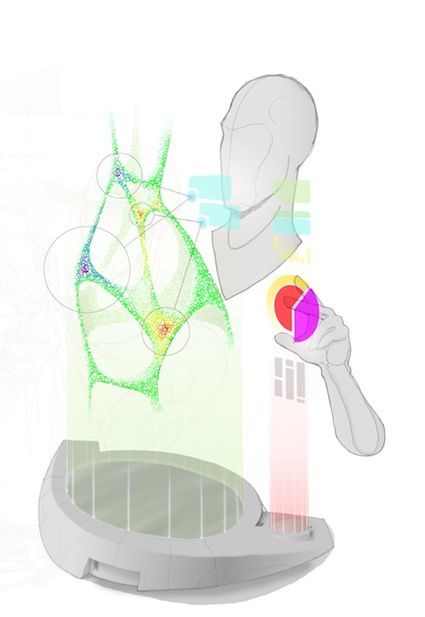 During my studies in Architecture and Industrial Design, I’ve tried to demonstrate that our simulation technology is easy to use and can deliver INNOVATION. This is a direct result of advancements in graphic user interfaces that enable an intuitive use of the technology.

I’m convinced that today an INTUITIVE SIMULATION tool is the key to developing new ideas, and Altair is constantly working to create aninnovative technology environment that is increasingly easy to use.

You can be completely immersed in a digital environment that helps you to develop your ideas.
Tools like solidThinking Inspire  finally open the boundaries between engineering and design, making simulation available to a vast audience of creative architect and designers. 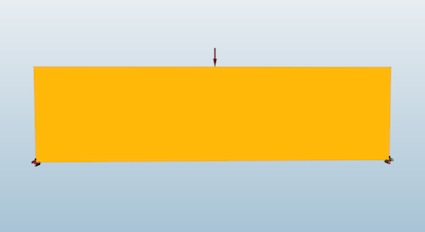 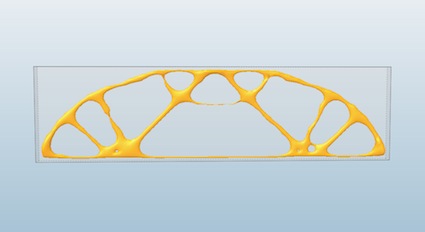 The main objective of this article is to show how to apply structural optimization at the early stage of the design process with a focus on the design of a bridge.

This article stems from the requirements to investigate and explore the meaning of Structural Optimization in the architectural field to create Architectural Structural Forms. The first considerations of the topic started a long time ago, during the study of architectural projects, particularly with the ability of great architects to transform ideas into masterpiece buildings.

The simple question you would ask when viewing their work is clear: why doesn’t that complex structure fall down? Obviously, the question does not refer to traditional buildings or standard constructions but to large structures, such as museums, train stations, airport terminals and so on.

Often, fascinating projects became only artistic expression and pure formalism because they lacked feasibility or they had to find a decisive compromise that interferes with the aesthetic, revealing only a vague idea of the initial concept.

In many cases a sinuous building is supported by a load-bearing structure developed after the concept. This approach forces the engineers to find a special structure able to fulfill the structural requirements and preserve the attractive shape.

To generate elegant and complex forms, reinforced concrete frequently represents an interesting solution. Today, thanks to the suitable use of steel-bar reinforcements and giant form-molds, it is possible to solidify a fluid-concept in the form desired. However, when the structure, for different reasons, needs to be lightweight, the construction process becomes more complex.

In previous decades, special tailoring of software has been attempted; mainly the applications are borrowed from such fields as aeronautics but without integrating the aesthetic-structural aspects of the design  In those applications, software potential was exploited only to build a particular form that was finalized in the early stage. 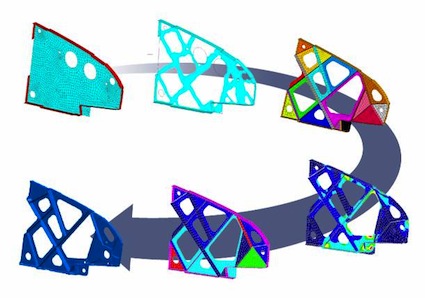 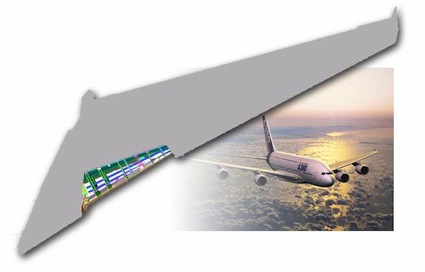 In other words, we can say that structural optimization can be used as a conceptual design technique.

Structural optimization now assists in the generation of Structural Forms with a few easy steps.
Let’s go through them in the typical setup you would use, for example,solidThinking Inspire or OptiStruct.

The first step is to define the Design Space that represents the maximum volume of the desired structure and th en assign loads and constraints. Thanks to an enhanced synergy, software and designer can interact, influencing the design process while generating innovative results. The designers are not limited to the tool; instead, they are leading the design process. 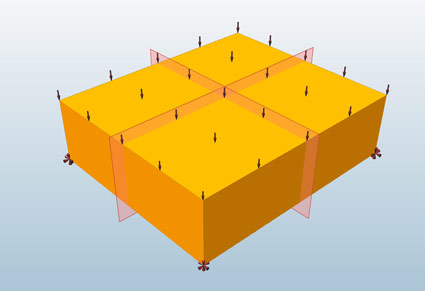 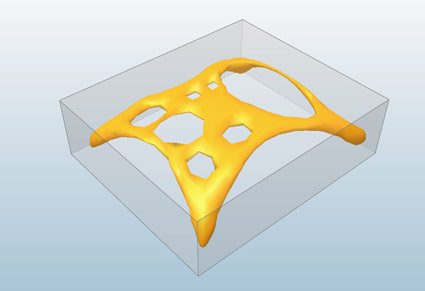 Bringing the above example into a real use case, the specific shape of the Pegasus Bridge 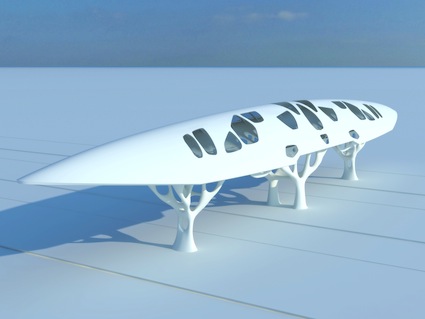 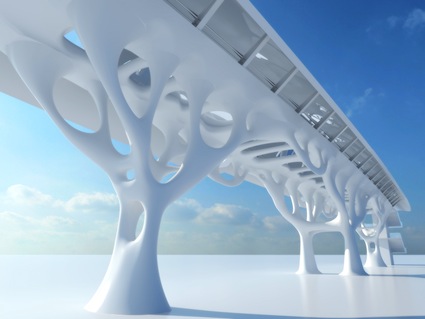 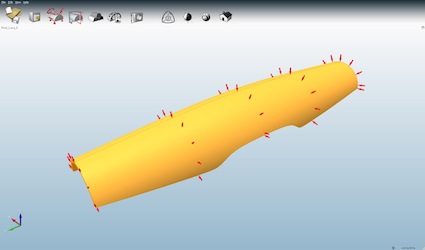 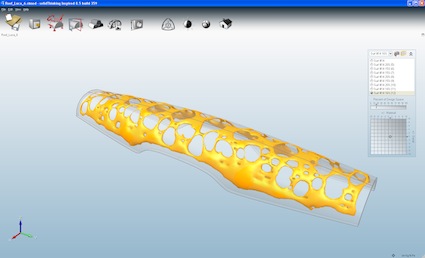 This particular structural optimization has generated the organic shape of the pillars that support the footbridge and its shelter. 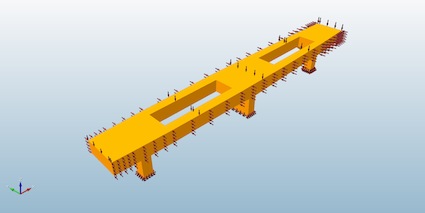 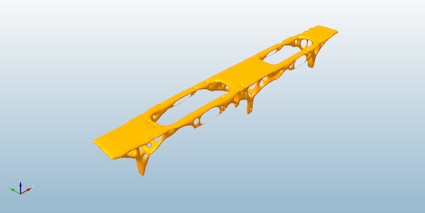 A common way to design a rational structure is to create a system composed of 2D elements, such as beams and pillars. In a paradoxical way, an optimal solution is represented by an organic-like structure in which the material is arranged to guarantee strength and lightness.

“What’s better than an intuitive technology that allows you to explore non-intuitive-optimal solutions?”

Looking forward to reading your comments below.

References
Essential bibliography
The present section is constituted by the essential references cited in the work multiple times.